COVID-19 Update: The Watermark team is working remotely and ready to serve your business with thoughtful and dynamic content.
AboutServicesOur WorkBlogContact
//

Look around. Nature can be found everywhere in our lives, and no, I don’t just mean the natural environment surrounding us. Organic design and nature-inspired design can be found almost everywhere we go throughout our daily lives.

As a design trend that's been around for quite some time, nature-inspired design is only going to become more popular in the years to come as we start to come out of the global pandemic. This past year has obviously been different than any other year that we were used to. Many people spent much of their time indoors to help slow the spread of the virus and, as a designer who's been stuck to the home-office life, I can attest that most of us are probably ready to get back outside and enjoy the fresh air. That being said, let's all be on the lookout for the natural world to make its way into new and upcoming designs throughout this next year!

But let's start from the beginning: What is nature-inspired and organic design?

A form of this type of design can also be known as biomimicry. Biomimicry is basically a fancy word for a simple concept—the application of materials, structures, and systems that are based on biological entities to find sustainable solutions. A great real-world example of biomimicry can be seen in the Japanese bullet train design. The problem with the original bullet design was that the sound coming from it exiting a tunnel was too loud for neighboring communities. An engineer on the team trying to solve this problem had done research into the species of a bird called the Kingfisher. This engineer noticed that when the Kingfisher dove from the air into the water that its beak created a very small splash due to the shape and aerodynamics of its beak. Through this research, the problem with the sonic boom of the Japanese bullet train was now fixed with the new design mimicking that of the beak of a Kingfisher bird rather than a bullet. This was a great sustainable solution to fix the original problem. However, organic design doesn't just have to be a sustainable solution to a real world problem.

In my role as a graphic designer, I need to be able to design creatives that communicate to the viewer in a specific way. Visual communication is at the forefront of every designer’s mind. Designers are able to provoke feelings and emotions in the viewer’s mind.

There are many elements that can be found throughout the organic design trend that help incorporate the natural world into our everyday lives.

Some of these include:

These elements and characteristics that help create this design trend can all be found in the natural world. I mean, what better source of inspiration to invoke the feeling, sight, and sound of being surrounded by nature, than by using Mother Nature herself?

Aside from the Japanese bullet train, another nice example of design inspiration driven by Mother Nature can be found in the World Wide Fund for Nature (WWF) print advertisement. The goal for this ad was to raise awareness for speaking up and raising nature's chances to thrive. 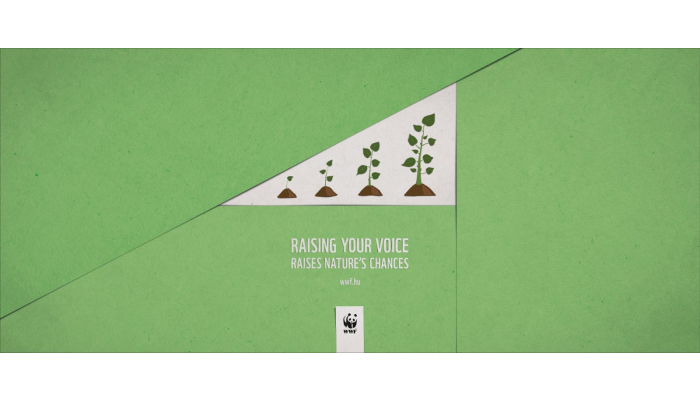 By simply using the soft green tone to surround the growing plants, the focus is brought right into the juxtaposed volume bar. The cardboard paper also connects the viewer into the ad and relates back to the natural world that humans have manipulated into man-made products, thus pushing the connection of nature even farther.

Take a look at the following web design example on https://asknature.org/ 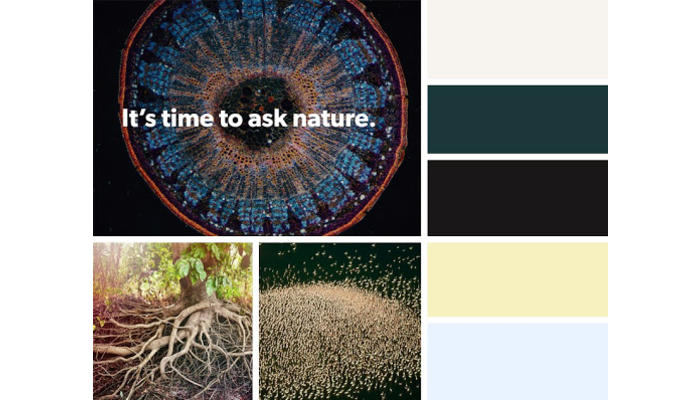 This website loads with a large image of what seems to be a microscopic cell. This can also be perceived as a mirror to the image of our universe. These two components immediately connect the viewer to the natural world. As you start to scroll, the image disappears into a shrinking circle. At one point, this also resembles or portrays the human eye—just another reinforcement into the connection with natural elements. As we keep scrolling, we'll notice that this website consists of soft neutral tones throughout. The imagery used throughout this website only strengthens the connection to nature. Everything about this website does its job to communicate and invoke nature in every sense to the viewer.

Now, this design trend is definitely not new and I also believe that it will not go away anytime soon. From all of the characteristics that stem from organic design, this trend is very adaptable and can be used in almost any style or technique.

Watermark can help incorporate nature-inspired design into your branding with thoughtful, creative solutions. Contact us now.